In many ways it was the perfect match: Ernest Hemingway whose heroes personified his definition of courage – “grace under pressure” – and Gary Cooper, the man who often portrayed those characters on screen. Yet in other ways-politically, intellectually, and personally- Hemingway and Cooper were a study in contradictions. The story of this extraordinary 20+ year friendship is the focus of this documentary, the film narrated by Sam Waterson, features interviews with such Hollywood luminaries as Kirk Douglas, Charlton Heston, George Plimpton, and Patricia Neal.

The film was reviewed by The New York Times film critic Andy Webster on October 11, 2013 and was named an NY Times Critics’ Pic by Manohla Dargis, A. O. Scott and Stephen Holden. Webster said the picture was proof that the work of these two men “endures and so does what they stood for”.

Michael Nordine of the Village Voice said that the film was informative to a fault, while Robert Abele of the Los Angeles Times said, “There’s an intriguing investigation to be made of the unlikely bond between an easygoing, friendly Hollywood conservative and an intemperate, hard-drinking arts-and-letters liberal who chewed on heroic ideals for a living.” 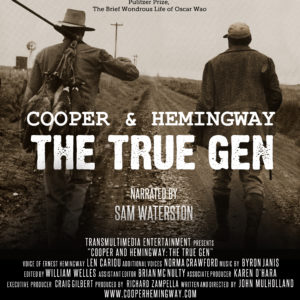